"I can make those gun shots 'pop!'" Paladin has debuted the official trailer for an indie drama title Shot, set right in Los Angeles in the middle of Hollywood. The film tells the story of a sound designer who is struck by a random stray bullet on the streets of LA. "One bullet, three lives changed forever." Noah Wyle stars as the man who gets shot, and Sharon Leal plays his wife who is with him at the time. The full cast includes Jorge Lendeborg Jr., Xander Berkeley, and Elaine Hendrix. Described as a "visceral roller coaster ride unflinchingly exploring the consequences of gun violence in America." I like the intensity and intimacy of this, with the POV shots following him into the hospital. Might be worth a watch. Check this out below. 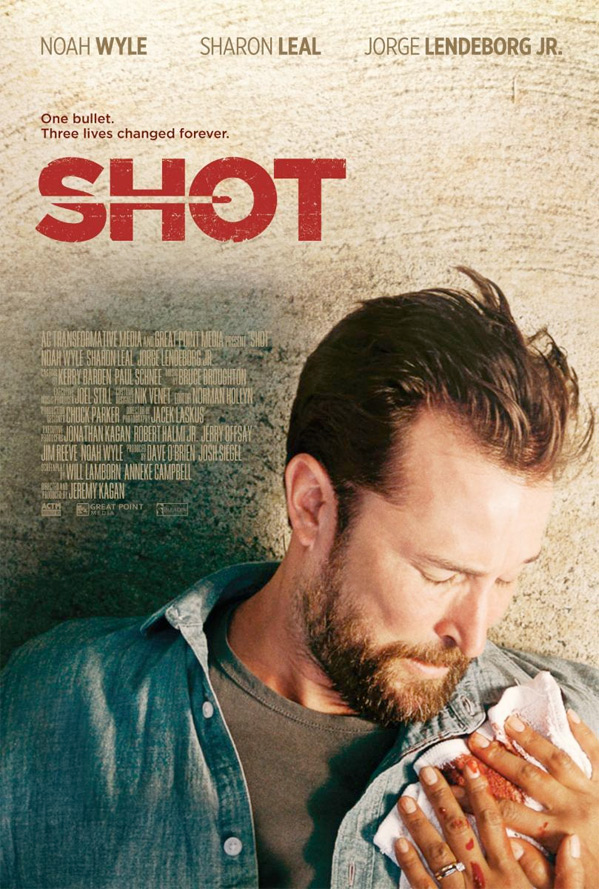 Shot begins as sound mixer Mark Newman (Wyle), is pumping up the volume on a bloody shootout scene in an action film. Hours later, after an argument with his wife Phoebe (Leal), Mark is suddenly felled by a real random bullet, and lies bleeding on the pavement with a chest wound. With Phoebe desperately trying to stop the bleeding, they both agonizingly wait for an ambulance to arrive as Mark fights for his life. Meanwhile, hidden behind a fence across the street, a teenager, Miguel (Lendeborg), watches in horror with the still smoking gun in his hand. A gun that was just handed to him by his cousin and meant to protect him against gang bullies. Shot is directed by veteran filmmaker Jeremy Kagan, of films including Big Man on Campus, The Journey of Natty Gann, The Sting II, The Big Fix, and lots of TV work previously. The screenplay is written by Anneke Campbell and William Lambom, based on a story by Jeremy Kagan. Paladin will release Kagan's Shot in select theaters starting September 22nd this fall. Thoughts on this?