"Her eyes never forget." Netflix has unveiled the powerful first official trailer for Angelina Jolie's new film, titled First They Killed My Father, which will premiere at the Toronto Film Festival just before it hits theaters/Netflix. The full-length title for the film is First They Killed My Father: A Daughter of Cambodia Remembers, based on the book written by Loung Ung, who also co-wrote the script with Jolie. The film tells the story of the deadly Khmer Rouge regime in Cambodia, which was the corrupt Communist Party that lead the Cambodian genocide. The authentic cast includes Sareum Srey Moch, Phoeung Kompheak, and Sveng Socheata. It's actually very impressive that Jolie has decided to tell this story, using a local cast, and diving fully into this horrific story in Cambodia's history. Looks like it could be good. Give this a watch.

Here's the first trailer (+ poster) for Angelina Jolie's First They Killed My Father, direct from YouTube: 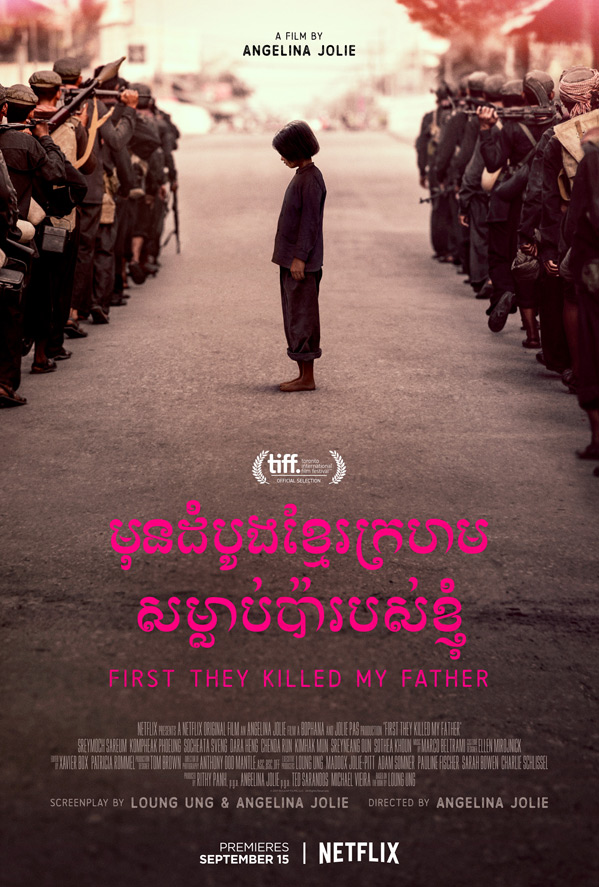 First They Killed My Father is the adaptation of Cambodian author and human rights activist Loung Ung’s gripping memoir of surviving the deadly Khmer Rouge regime from 1975 to 1978. The story is told through her eyes, from the age of five, when the Khmer Rouge came to power, to nine years old. The film depicts the indomitable spirit & devotion of Loung and her family as they struggle to stay together during the Khmer Rouge years. First They Killed My Father is directed by American actor-turned-filmmaker Angelina Jolie, director of the films In the Land of Blood and Honey, Unbroken, and By the Sea. The screenplay is written by Loung Ung & Angelina Jolie, based on Loung Ung's book of the same name. Netflix will release First They Killed My Father in select theaters + streaming starting September 15th in the fall.